Three leaders from counties along the U.S.-Mexico border came together at the inaugural South Texas Summit to talk about immigration issues.

Kinney County Judge Tully Shahan, City of Del Rio Mayor Al Arreola Sr. and Rio Grande City Mayor Joel Villarreal appeared on the panel held Thursday at the Embassy Suites at Brooks. The discussion was moderated by Al Arreola Jr., president and CEO of the SoTX Business Partnership. The Business Journal served as a media partner for the event.

Villarreal said immigration is a problem. He said federal lawmakers need to find a way to fix it and engaging in "asinine political mudslinging" won't help.

He added the Rio Grande Valley and Rio Grande City are great places to live and complained of constantly having to correct what he calls a "false narrative" and mischaracterization of the region. Villarreal called RGV a premier energy powerhouse with international ports of entry processing billions of dollars in trade.

Mayor Arreola said leaders in D.C. need to put forth a strong reform bill, saying many immigrants are coming to work, not for handouts.

Shahan also agreed it's up to Washington to find a fix and claimed Kinney County is inundated with people crossing the border illegally.

"We catch about 4,500 people a month," he said, adding Texas Governor Greg Abbott has sent his county about $3 million to prosecute the cases.

He offered his "real solution" to fix the immigration problem. "You just have to put an army there and meet them at the water's edge, that's the only way it's going to stop," he said.


Goals for the upcoming legislative session:

Shahan said state lawmakers need to fund mental health services in border cities. He claimed there is one certified psychiatrist for every 40,000 people in metropolitan cities.

"We have one certified psychiatrist for every 123,000 people in the border cities," Shahan said.

Arreola said he wants to push state lawmakers to help fund transportation routes to keep cargo trucks away from downtown Del Rio. He also hopes to see a link between the international bridge to throughways using Highways 79 and 90 to get trucks to San Antonio and beyond. He also wants funding for infrastructure projects.

"I think on the south side of our city, our streets are pretty bad. Everything is in shambles," he said.

Villarreal spoke of the need for the state of Texas to maintain a good working relationship with Mexico. It's beneficial for both sides of the border to work together so that Mexico doesn't decide to move its shipping routes to another state, "because that could easily happen," he said. 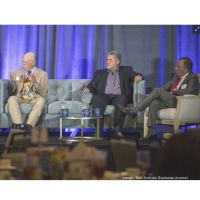