“There are more than 20,000 more homes already plotted for Medina County,” said Schuchart.

For a county with fewer than 51,000 residents currently, those already planned homes will drastically change eastern Medina County.

Though the growth isn’t currently as hot and heavy for Atascosa County, immediately south of Bexar, Hurley said that as South San Antonio stacks up more economic wins, interest in the northern edge of Atascosa will increase.

“We already have many residents who work at Toyota or other larger employers on the South Side,” he said. “We can’t accommodate development that size, but we want more medium and smaller businesses to see us as a strong option.”

For McMullen County, the growth in San Antonio remains at a distance. The county has several oil and gas wells throughout it, which are a major contributor to its tax base, but the majority of its longtime citizens are in agriculture and ranching.

Though the drought hit the region hard, Teal said many of his family ranchers had made a solid recovery with recent rains.

“We got good coverage and the majority of our ranching families are in better shape,” he said.

Agriculture remains a key industry for all three counties and the judges all spoke to the importance of supporting the family ranches that ring the San Antonio area. All three judges themselves kept some cattle in fact.

“The good news is, my cows now have some grass to eat,” said Hurley. “But I warn you, inflation has hit ranchers hard and it’s going to end up with the consumers.”

Family ranchers have seen costs of diesel, feed and many other key supplies soar over the last year and those cost increases are going to end up on Texans' dinner plates in the near future, according to Hurley. 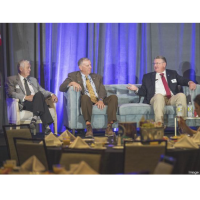