Momentum continues to build at Port SA, including plans for DeLorean's new headquarters.

Port San Antonio's plan to expand new development as part of a next-gen reimagination of the former military base could have far-reaching implications, triggering broader reinvestment south and west of downtown.

One of the port’s newest tenants is optimistic that what’s in store could have a halo effect, generating greater interest and opportunity in an area in need of an economic infusion.

That plan includes a new anchor office tower that could span as much as 300,000 square feet and which will house DeLorean Motor Co.’s new San Antonio headquarters. Port San Antonio officials are also pursuing the development of new aviation facilities, including a vertiport that could potentially accommodate electric vertical take-off and landing, or eVTOL, aircraft.

“I think a lot of people see the benefits, especially here on the Southwest Side of San Antonio, the economic development that this will bring,” DeLorean CEO Joost de Vries said.

That gap could narrow as more companies plant their flag at the port and as local universities feed that talent pipeline.

Access to talent and support from workforce development initiatives were a factor in DeLorean choosing the Alamo City and Port San Antonio for its new headquarters home, de Vries said.

“The scope of these projects at Port San Antonio is a validation of the evolution of the South Side,” said Al Arreola, president and CEO of the South Texas Business Partnership, formerly the South San Antonio Chamber of Commerce. “The work that is being done at the grassroots level from our partners in education and industry is going to continue to reap success in our backyard.”

Late last year, the San Antonio Hispanic Chamber of Commerce confirmed the organization was moving its headquarters from Pearl to Port San Antonio. The chamber’s president and CEO, Marina Gonzales, said it’s a campus “at the forefront of so many innovative initiatives.”

Others have a vested interest in what the port has in store.

"The port is a major asset in the backyard of the West Side, an area steeped in high unemployment and poverty," Prosper West President and CEO Ramiro Gonzales said. "The incredible momentum of the port has the potential to be married along with economic development opportunities to adjacent neighborhoods."

The new Port San Antonio playbook includes on-campus development that’s attracting companies, talent and now more visitors too. The build out of Tech Port Center and Arena is an example of that next-gen pivot.

“A few years ago, you came down here for work and then you left, and you didn't come back until your next shift,” Port San Antonio President and CEO Jim Perschbach said. “Now, we're building theaters, we're building gathering spaces. We've got people who want to spend time here.”

Economic development leaders believe that strategy will have a spillover effect as a remake of the sprawling campus draws attention and investment beyond its borders.

“When a vision is communicated and put to action, people will not only invest their money, but they will also invest their time,” Arreola said. “The development at Port San Antonio is going to have purpose and intent and will bring the right kind of jobs we need to build prosperity on the South Side.” 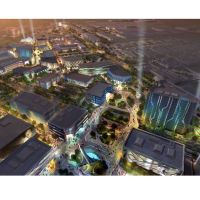 The South Texas Business Partnership is built to be a catalyst for bringing our area’s business leaders together as advocates for change and further development of our region.