Born to teenage parents and raised in Corpus Christi in an 800-square-foot multigenerational household, Rudy Garza beat the odds to ascend to the top executive position of one of the most prominent utilities in Texas.

Garza was named interim CEO of CPS Energy in November 2021. He first joined the company in 2012 as vice president of external relations and steadily worked his way up. In his new role, Garza has shared plans to prevent another crisis like last year's Winter Storm Uri, and he recently rolled out a 25-year partnership with Consolidated Edison Development to develop a 300-megawatt solar project in Goliad County— the largest solar project in the utility's history, which is poised to create up to 300 temporary jobs.

Garza has come a long way since his childhood in Corpus Christi, where he said the family home didn't even have air conditioning. "We'd open up the windows and sleep in our underwear," he said. "My upbringing probably resonates with the majority of people in the San Antonio community."

Growing up, Garza excelled in math and science and attended the University of Texas at Austin. To help pay for school, he worked as an engineering intern for Dallas-based TXU Energy. After he graduated from the UT Austin in 1996 with a bachelor's degree in electrical engineering, he landed a job at TXU. Garza learned the Texas market from the ground up, doing everything from customer service, administrative management and governmental affairs. He served as TXU Energy's director of state advocacy from 2004 to 2008.

"I was the youngest executive at TXU. When they made me director, I was 33," said Garza, who also found time to earn an MBA from the University of North Texas in 2004.

TXU was bought by a private equity group in 2007 at the same time Garza's wife was facing some health challenges. Garza returned to his hometown for family support and in 2008 landed a job with the city of Corpus Christi as intergovernmental relations director. Soon he was promoted to assistant city manager.

After about four years with with the city of Corpus Christi, Garza received a call about an external relations position in government affairs at CPS Energy — a role for which he'd been recommended.

"I didn't even tell my family I was interviewing till the third interview," he said.

During his trajectory at CPS Energy, then-CEO Doyle Beneby suggested he could someday be chief executive. Garza recalls Beneby asking him what he wanted to do when he grew up. Garza responded that he wanted to continue to provide value to the company.

When former CPS Energy CEO Paula Gold-Williams announced her retirement in October 2021, Garza was asked to step into the interim CEO role.

"The fact that I'm the first Latino CEO of CPS Energy in this day and age is remarkable," he said. "I'm honored for it to be me — I just can't believe it's 2022 and I'm the first in a city that's more than 60% Hispanic."

Stepping into the role during the Covid pandemic and in the wake of Winter Storm Uri was a challenge. Having lost some of the workforce, Garza helped rebuild the organization and reorganize employees. Looking to connect with the community and restore trust in the utility, Garza and his team worked diligently through the winter, including calling more than 100,000 customers during the pandemic and helping connect them with $55 million in Customer Outreach Resource Effort bill assistance. The utility has also been hosting community events and going door-to-door on high-burden utility census tracks, checking in with housebound, mobility-challenged or elderly customers.

"If CPS Energy is strong, the entire city of San Antonio is strong," Garza said. "The community needed us. We're not giving up on anybody — even customers who just despise CPS Energy. I just ask them to give us a chance to prove we're the company they want us to be." 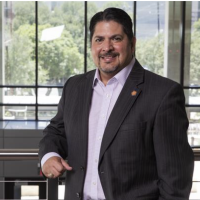